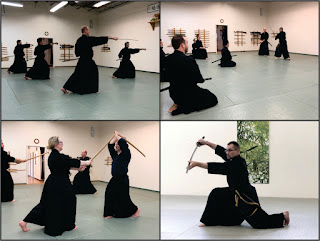 In the June 2018 issue of our dojo journal, Sword and Spirit , I presented an essay titled “21st Century Kenjutsu,” which discussed the significant and wide range of practical benefits to be derived by training in the seemingly anachronistic, even obsolete art of combative Japanese swordsmanship. Now that our kenjutsu-kai is one of the very few groups in the world authorized by the headquarters dojo in Japan to offer authentic training in Ono-ha Itto-ryu, the potential benefits to be gained are even greater. But, what about iaido? This art of solo forms using the Japanese katana is the other legitimate, koryu form of Japanese swordsmanship practiced at Itten Dojo — we train under the guidance of Nicklaus Suino Sensei (Japanese Martial Arts Center, Ann Arbor, Michigan) . Compared to kenjutsu, the benefits are if anything less obvious. The reality, though, is the benefits of iaido are equally broad and deep — similar in some ways and different in others, but with unique attributes tha
Post a Comment
Read more
December 09, 2021 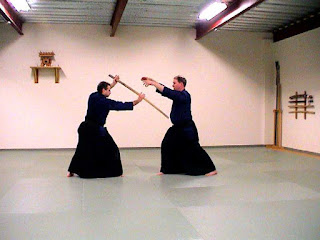 Tachi-dori Kiri-age Many classical and classically-styled systems of kenjutsu incorporate a variety of weapons and unarmed techniques. In older usages of the term, jujutsu was not just a category of unarmed techniques, but rather any supplemental technique or weapon employed to cover the gap in response between an attack and the moment the primary weapon could be brought into action, or to cover instances in which the primary weapon was lost. The jujutsu in schools of kenjutsu may encompass waza related to  nuki-dome  (stopping a draw),  kiri-dome  (stopping a cut),  tachi-dori  (sword disarming), and  tedori-gaeshi  (“returning a grab” — methods of releasing a grip on one’s wrist, so that a draw can be completed). These sets of techniques tend to be somewhat generic, and may be less complex mechanically than analogous techniques in arts like aikijujutsu. This article focuses on a tachi-dori waza known as Kiri-age. Read more at https://ittendojo.org/articles/blog-16-Tachi-dori-Kiri-a
Post a Comment
Read more
December 02, 2021 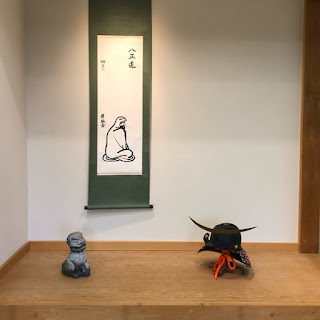 KAKEMONO OF THE MONTH — DECEMBER The scroll for this month features Bodhidharma (“ Daruma ” in Japanese), the founder of Zen Buddhism, seated in lotus position and facing the wall in meditation. This is one of a series of works calligrapher Paul Myers focused on the figure of Bodhidharma. The calligraphy in upper right reads, “ Hasshōdō ,” the “Noble Eightfold Path.” Bodhidharma is an important figure in martial arts history because, according to legend, the exercises he taught the monks at the Shaolin Temple in China (to facilitate arduous sessions of zazen) became the basis for kung fu. Travisano Oshō, one of the two members of our dōjō that are ordained Buddhist ministers, adds insights to the meaning of the Noble Eightfold Path: “The cornerstones of the Buddha’s teachings are the Four Noble Truths, of which the 8-fold Path is a part: First, the truth that we all experience suffering; Second, that it is caused by our cravings for things that we think will fix it (e.g., ‘I’d finall
Post a Comment
Read more
More posts

Itten Dojo
Itten Dojo is a school of the traditional, Japanese martial arts of kenjutsu and iaido (swordsmanship) and aikijutsu (highly sophisticated grappling). Our focus is personal transformation via challenging training in practical skills. Visitors are always welcome.