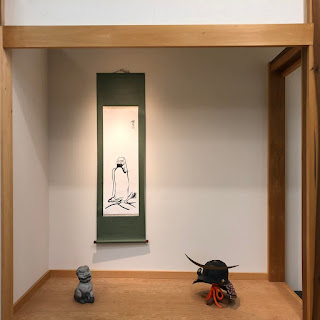 The hanging scroll for April, again from calligrapher extraordinaire Paul Myers, is another portrait of Bodhidharma, the founder of Zen Buddhism — this time, standing on a reed. According to legend, following an unsuccessful audience with the Chinese Liang-dynasty Emperor Wu, Bodhidharma is said to have crossed the Yangzi River without a boat, standing on a single reed to continue his journey to promote Zen. #ittendojo #aikijutsu #kenjutsu #iaido #shodo

Popular posts from this blog 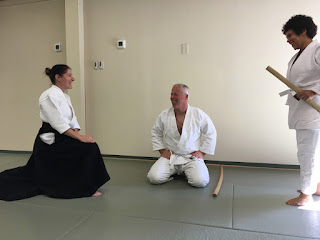 Relationships are the Most Important Thing In Japanese, the term “kai” means a group or association. In the context of budō, kai typically refers to a group training together in the same art. Within Itten Dōjō, there are three, separate kai: the aikijutsu-kai (Aikijutsu Tendōkai), the kenjutsu-kai (Ono-ha Ittō-ryū), and the iaidō-kai (Musō Jikiden Eishin-ryū). Each of the groups is independent of the others, but every person training with us is first and foremost a member of the dōjō and we all support each other, regardless of our individual interests. Many members train in more than one art. Different martial arts organizations have wildly differing views on what actually is most important in training — at least this has been our experience, and I think we can make a strong claim to having seen it all. Believe me, it wasn’t all good. Itten Dōjō is now in its 30th year, and several of us had decades of training prior to the founding of the dōjō. Over the course of the past three decad
Read more
February 22, 2022 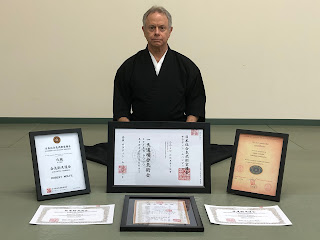 Although I always post an announcement when members of Itten Dōjō receive promotions, I never do that with regard to myself. It’s also the case that we don’t typically display promotion certificates, believing the appropriate place for such documents is tucked away, out of sight, in a fire safe. The only certificate heretofore displayed in our dōjō, in my office, is for the final promotion I received in karate, from Ted Vollrath Sensei — and it’s only been displayed to honor his memory. Recent circumstances, however, incline me toward making an exception to both policies. In consequence of issues with a former organization, I have been for almost two years without documents certifying rank in aikijutsu, one of the primary arts I teach. This hasn’t really been any kind of practical impediment, since anyone can readily check into my history and experience. But the fact remains that anyone entering the office of a professional expects to see a credential hanging on the wall, whether it’
Read more
June 08, 2022 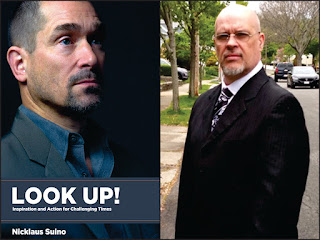 The rebirth of Itten Dojo is much more than simply an evolution in the arts we practice. I’ve heard it said many times, in many different contexts, “When the student is ready the teacher will appear.” As circumstances forced us to take a hard look at what we were doing — and more importantly, why we were doing it — we realized that we had become even more strongly focused on making a positive impact on the lives of the members of the dojo than we had been already. We had entirely left behind any notion of producing students to “serve the ryu,” in favor of utilizing the ryu to serve the members. To be very clear: the heritage martial arts *must* be preserved, absolutely intact in their austere and rigorous demands, but the overarching justification for that preservation is its utility as a vehicle to help people improve their lives. I’ll never forget the five minutes at the conclusion of the weekend that was our formal start of iaido training with Nicklaus Suino Sensei, during which he
Read more

Itten Dojo
Itten Dojo is a school of the traditional, Japanese martial arts of kenjutsu and iaido (swordsmanship) and aikijutsu (highly sophisticated grappling). Our focus is personal transformation via challenging training in practical skills. Visitors are always welcome.